Vidit Santosh Gujrathi of PSPB, former under 14 world championextended his sole lead with 5.5 points by beating IM Arghyadip Das of Railways for the only decisive result in the seventh round of the ONGC 53rd National Premier Chess Championship 2015, organised by Tiruvarur District Chess Association at Kasi’s Inn today. He is one point ahead of IM P. Karthikeyan of Railways, who remained on second spot.

In a Slav defence played by Arghyadip, Vidit gained a slight advantage on the 33rd move by forking his opponent’s king and rook. The two rooks vs rook and knight ending looked like a draw, when Arghyadip committed a minor mistake of moving his rook instead of knight on the 43rd move. Another mistake on the very next move cost the game to Arghyadip.

In an intense struggle of Ruy Lopez opening game, IM P Shyaam Nikhil of Tamil Nadu fought gallantly against former under 16 world champion and defending champion SP Sethuraman of PSPB. He capitalised on a couple of mistakes by Sethuraman and was in a commanding position. Shyaam blundered on 53rd move forcing an exchange of queens and could not regain the advantage to settle for a draw after 83 moves. Thus, Sethuraman avoided the embarrassing hat trick of losses.

The English opening between grandmasters M. ShyamSundar of AAI and Neelotpal Das of PSPB ended peacefully, each getting the share of half point after 35 moves.

After two successive losses in the previous rounds, former Commonwealth champion salvaged a draw against GM elect Swapnil Dhopade of Railways. Swapnil could not get a full point in the rook vs rook and pawn ending, leading to a Philidor position.

In a promising position arising from Bishop’s opening, IM K Rathnakaran of Railways did not continue correctly to slip to a draw with his team mate IM P. Karthikeyan.

After exchanging the queens on 19th move, Praneeth made a steady progress and he had a good advantage until 34th move, irrespective of Karthikeyanhaving a double bishop. At this juncture, Praneeth went into shell, deciding to stop the advancement of Karthikeyan’sa- and b- pawns and lost his advantage. The game petered out to a draw after 56 moves. The half point was enough for Praneeth to secure his first nine game IM norm.

Playing the black side of Ruy Lopez opening, GM MR Venkatesh of PSPB held his team mate and former under 12 world champion Deep Sengupta in a rook and pawn end game.

Results of Seventh Round 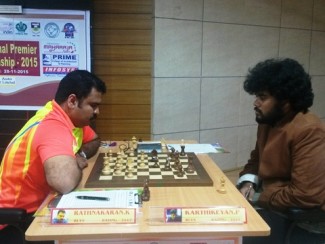 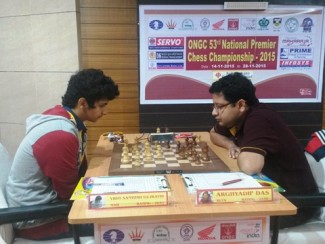 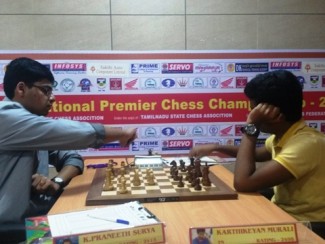