Defending champion SP Sethuraman of PSPB suffered second consecutive shock defeat, this time at the hands of IM K Rathnakaran of Railways in the sixth round of the ONGC 53rd National Premier Chess Championship, organised by Tiruvarur District Chess Association, at Kasi’s Inn, Tiruvarur today.Vidit Santosh Gujrathi of PSPB continues to lead with 4.5 points, after splitting the point Swapnil Dhopade of Railways, followed by IM P. Karthikeyan and IM Arghyadip Das of Railways with 4 points each. Seven more rounds remain to be played and tomorrow is a rest day.

Surprisingly, when IM Rathnakaran played with Black pieces thrice so far in the tournament, all his opponents had opted for English opening; the former had used the same variation and his game against SP Sethuraman is no exception. More surprisingly, Rathnakaran reversed the trend by winning against the formidable opponent, whereas he lost the other two games. When Sethuraman captured Rathnakaran’s pawn on 22nd move, he was expecting exchange of pieces and was planning to win with the help of two extra pawns. But, Rathnakaran ripped open the king side and brought the active rook to the centre. Sethuraman blundered to exchange the minor pieces, hoping to minimise the hovering of opponent’s pieces around his king. Rathnakaran, instead, put the last nail by a rook sacrifice, forcingSethuramaneither getting checkmated or losing his queen. The second consecutive loss to Sethuraman has diminished his chances to retain the title, but one can hope that he will bounce back in the second half of the tournament. The game needed only 24 moves to yield the result.

Adopting Grunfeld defence, Vidit decided to play it safe and agreed for a draw with Swapnil after 25 moves, the minimum number of moves required to be played (to offer/agree a draw), as per the tournament regulations. The Bishop opening game between IM Arghyadip Das of Railways and IM P. Shyaam Nikhil of Tamil Nadu also concluded with a draw, agreed after 25 moves.

Praneeth Surya playing the sharp Najdorf variation of Sicilian defence against P. Karthikeyan of Railways could not reproduce the form he exhibited in earlier rounds. When the queens were exchanged on the 35th move, Karthikeyan began to dictate. Though both promoted their pawns to queen, Karthikeyan‘s better positioned rook won the game for him in 69 moves.

Grandmaster MR Venkatesh of PSPB recorded his first win of the tournament, beating his team mate and former British champion Abhijit Kunte in a Scotch game. Kunte committed a mistake by playing c5 on 32nd move, which led to a loss of pawn and exchange. Abhjit resigned the game, when he had a bishop and pawn to that of rook and pawn to Venkatesh.

Bishop vs knight ending with equal pawns, originating from a Spanish opening between two Tamil Nadu players GM M Shyam Sundar representing AAI and GM Karthikeyan Murali resulted in a draw with half a point to each player.

Deep Sengupta of PSPB gave up two knights for a rook in the Queens Indian defence against his state and team mate from West Bengal and PSPB, but could not get a promising position out of it. Both had to be content with a draw after fighting for 56 moves.

Results of Sixth Round 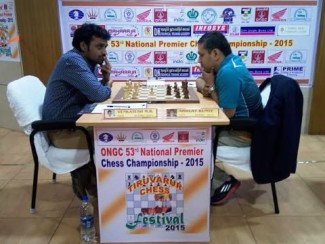 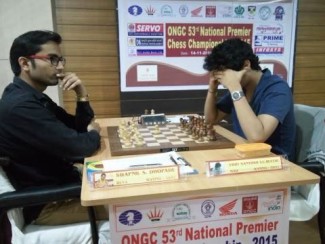 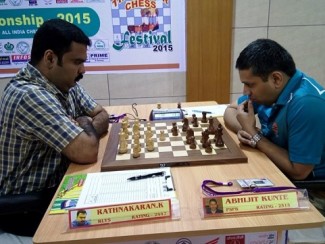 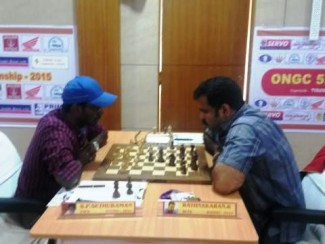