Tamil Nadu State Chess Association and Kanchipuram District Chess Association jointly organized a grand function to felicitate Shri D K Srinivasan on being conferred PADMA SHRI award by the Government of India for his outstanding service in the field of social work. This well attended function was arranged at the Russian Cultural Centre, KasthuriRanga Road, Chennai 600 018.  Shri N Murali, Managing Director, The Hindu was the Chief Guest of the evening.

Shri P R Venketrama Raja, Chairman, Ramco Group of Industries, as well as the President of the All India Chess Federation also chipped in offering his felicitations to the great man. Shri PRV wondered the simplicity of the man and the amount of dedicated hard work that he has done all these years.

The Chief Guest of the day, Shri N Murali, Managing Director, The Hindu dwelt at length about the journey of the great man for the last four decades.  While admiring the social services that he has done all these years,         Shri Murali wondered about the relationship of the game of Chess and     Shri D K S and later knew that Shri D K S has travelled to almost all the villages in Kancheepuram District for educational and social work, and all along, he was grateful enough to go alongwith the Secretary of Kancheepuram District Chess Association so that the game of Chess can be reached to the maximum number of households in the District.

Shri Murali then offered a memento – a silver plaque with a citation – appreciating the work done by Padmashri  D K Srinivasan.  While reading out the citation, the audience gave a thunderous standing ovation.  Padmashri  D K Srinivasan was at his humble best, thanking primarily his family members and the entire staff of the School ValluvarGurukulam as well as the doctors and other administrative personnel of the Hindu Mission Hospitals.  The award, he said, was only due to the untiring efforts put in by all these people, and he was honoured to receive the same as the head of a great team.  He also revealed that his motto “The body is to serve others”(Paropakarartham Idham Shareeram) and urged one and all to keep it simple and honest and the rest will take care of itself.

The function concluded with a Vote of Thanks by Shri M Muthukumar, Secretary, Kancheepuram District Chess Assocation as well as the Joint-Secretary of Tamil Nadu State Chess Association. 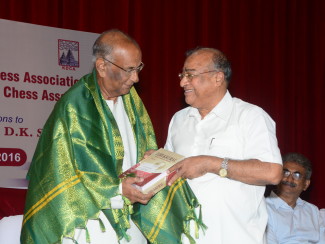 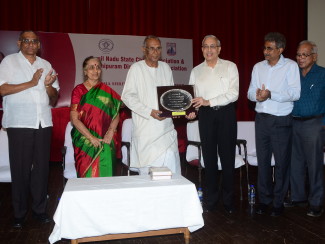